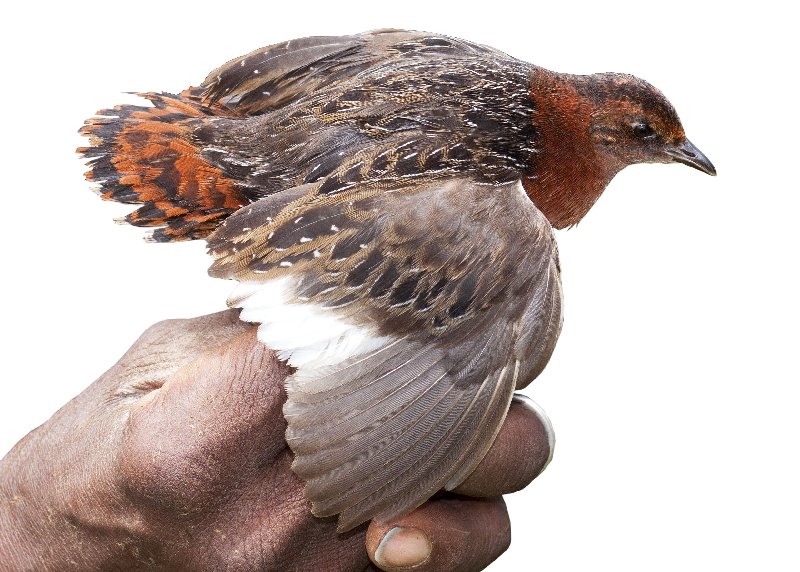 This bird is one of five given the highest category of threat – ‘Critically Endangered’ - in the Eskom Red Data Book of Birds of South Africa, Lesotho and Swaziland.

When Deon Coetzee, together with Warwick Tarboton, found the flufftail in the marsh at Middelpunt in 1992, there were only three known sites in South Africa. Deon was concerned about the condition of the wetland, especially the drainage ditches down each side.

Together with Malcolm Drummond, he formed Middelpunt Wetland Trust. One of the Trust’s first actions was to negotiate a lease of the 60-hectare wetland from the then owner, Michael Jansen. Shortly thereafter, the five kilometres of trench were filled in, allowing the wetland to revert to its natural state. Subsequently, Dullstroom Trout Farm purchased portion 9 of Middelpunt which included this valuable wetland from Michael Jansen.

Little was known about the flufftail and so the Trust decided to send a scientist to Ethiopia (where the bird was known to breed) to undertake research. In 1997 he made the first-ever scientific recording of the White-winged Flufftail’s nest and eggs.

Conservation work for the bird in South Africa has been centred around discovering more wetlands where the flufftail visits and then attempting to maintain or improve their conservation status.

Six more wetlands have been identified, one of them being a wetland at the site where Eskom wanted to build a pumped storage scheme. Environmentally based objections were sufficiently worrying for the then Minister of the Environment (Valli Moosa) to insist on various conditions before Eskom was allowed to continue with the scheme.

It is with this background that the Trust is doing its best to ensure that the diamond prospecting and mining, currently threatening Middelpunt Wetland, is prevented from any further activities.

The major threat to the flufftail in Ethiopia is damage to the vegetation in the wetlands where it breeds. Ethiopia’s population has more than doubled to 85 million in the last 35 years, with a corresponding increase in the number of livestock: cattle, horses, goats and sheep. The wetlands provide suitable grazing and, rather than the knee-high grasses and sedges needed for the flufftail to build its nest, the wetlands look more like a billiards table.

Conservation work by the Trust in Ethiopia has been focused on supporting an educational initiative for the community living on the edge of the main breeding wetland for the bird. Six years ago, the Trust was approached to help fund a schoolroom for the six-year-olds in the village, who had to walk eight kilometres, and back, to the nearest school.

A happy coincidence brought the flufftail to Middelpunt at that time. We were keen to allow ‘twitchers’ to see the bird, without damaging the wetland. Three groups were invited and we were able to show the bird to two of the groups. Their donations amounted to R25 000, which we gave to the school project. Sixty children use this schoolroom.

The community soon recognised the value of local schooling and, in the past five years, have built seven more classrooms. Theirs is a subsistence farming community, where cash is a scarce commodity, and so the Trust has supported their efforts by paying for sand and cement for the floors, and for doors and windows. Today, 580 children receive schooling from eight teachers.

They are well aware of the value of the White-winged Flufftail, naming the school after the bird and patrolling the wetland for three months, over the breeding season, to prevent grazing and other disturbance.

Middelpunt Wetland Trust will continue with its efforts to conserve the White-winged Flufftail and its habitat and is happy to have environmentally aware and responsible landlords in Dullstroom Trout Farm (Pty) Ltd.

Trustees of Middelpunt Wetland Trust are:

Our Middelpunt farm comprising 840 ha of portions 9/320, 16/320 and Rem/320 is in the central section of the Greater Lakenvlei Protected Environment. This protected area was declared in April 2017 with the specific aim of protecting Middelpunt and the surrounding area, much of which is wetland, and is classified as “irreplaceable”.”

Contact person is Dr Kyle Lloyd of BirdLife SA who has recently been appointed and is now stationed in Dullstroom. His cell is 071 1034464.